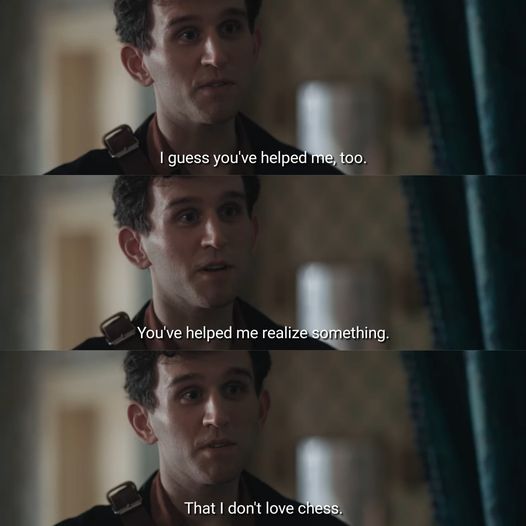 Harry Beltik was a traditional Chess player and one of the best chess players in Kentucky. His ratings were 2200+ and he was a Master.After Beth losing to Borgov in Mexico, she returns to Kentucky to bury her mother (Alma) and that’s when Harry calls her and lands at her place in order to help her in Chess, but after some time, he realises that he doesn’t love Chess, like how Beth does. This makes him more clear about his future.

I feel sad for him, he could have become a Grandmaster if he had tried further but no, it never happened, you really don’t know the path of life until you realise what’s important for you and where you need to spend your time in achieving things you are concerned about.He was one of Beth’s friends in Benny’s room in Newyork to help her champion the game against Borgov for the Chess Championship held in Moscow, Russia .

I was finally feeling happy for him that he chose to continue travel in Beth’s life journey.By the end of the series, he is an assistant manager of a grocery store while studying to become an electrical engineer.